Born and raised on a ranch in California, Alison Tetrick is a cowgirl, scientist, storyteller, and professional cyclist. She’s a former triathlete and NCAA tennis player. A published scientific author and an entrepreneur. In short, the woman is an inspiration.

A pro cyclist since 2009, Tetrick has raced around the world at the highest levels. She represented the USA National Team at the Pan American Games and has medaled at the UCI Road World Championships in the team time trial.

After deciding she was done with road racing in 2016, Tetrick entered the world of gravel racing, which she says, “kind of changed my life”. She went on to win her first-ever gravel race, Unbound 200, and earn the title of three-time Gravel Worlds Champion.

Like many of our CamelBak Athletes, Tetrick comes from a sporty family. Her dad played football for UCLA, and her grandpa was racing bikes, and winning, well into his 80s. While always a fierce competitor, she never played team sports growing up (the commute was too long). After a collegiate tennis career and a few successful triathlons, she found bike racing—and it clicked immediately. “I felt like I should have been doing it all along,” she told Bicycling magazine in 2018.

Tetrick has survived a traumatic brain injury (TBI) resulting from two separate concussions, both sustained during professional races. The aftermath involved broken bones, hospital stays, months of rehabilitation, and side effects that remain to this day. The crash put her through hell and almost took her life. Remarkably, though, the athlete says that in some ways, she’s come back better for it.

A firm believer in the life-long quest of growth and development, Tetrick continues to challenge herself and inspire others. She serves on the Board of Directors for USA Cycling and is passionate about creating opportunity, education, and access to cycling through scholarships and community engagement.

We can’t wait to see what Alison will accomplish next! Watch as she gears up for a ride with the all-new Fusion reservoir. 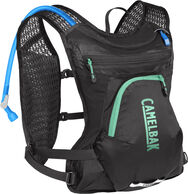