This is the fourth and final recipe in a four-part series to celebrate our new limited-edition brew! Check out our other pairing recipes:

COOLER. WATER. BEER. Objectively, hydration is the most vital part of any adventure. Subjectively…it’s beer.

Our collaboration with Oskar Blues Brewery was a no-brainer/easy fit. Our mission states closely align and both of our origins started on the backs of mountain bikers—one more literally than the other

CamelBak founder Michael Eidson and Oskar Blues founder Dale Katechis are forever linked by their desire to find a packaging solution that worked better than bottles. Michael assembled the first CamelBak from an IV bag and a sock. Certainly a strange contraption to be pinned to his bike jersey, but improved his performance during long days in the mountain-bike saddle.

Oskar Blues became the first craft brewery to can beer. This gave Dale and his mountain biker crew the option of cracking a robust beer anywhere—going where the glass bottle could not.

Thinking outside the bottle led to lots of funny looks and finger pointing. Both ideas were undeniably odd, but they worked better than the status quo. It takes a lot of bushwhacking to blaze a new trail and nothing has stopped either of us from finding our way to the summit.

To fuel up for your weekend adventures, our friends over at Camp Chef created four tasty recipes that pair perfectly with the 'Bak Country brew. Cheers to that!

1. Mix all the ingredients into a blender and blend together into a rich deep colored marinade. Place the chicken in a bowl and pour the marinade over it, rubbing it into the crevices and under the skin where applicable. Make sure it gets inside the bird also. Allow the chicken to sit overnight or up to 2 days in the marinade, turn it every 5-8 hours so it absorbs the flavors evenly. Or place in a large Ziplock bag with all the marinade and squeeze the air out before you zip it up.

2. Remove the chicken from the marinade and reserve the leftover liquid. You can truss up the legs to keep them in position easier, and fold the wings under the back, also tying them together. Set the grill to 350 degrees initially to sear the outside of the chicken, about 30 minutes or so. Next, turn down the grill to 325 degrees and continue basting and cooking until the chicken reaches 165 degrees internal temperature.

3. Let it rest 15 minutes before you dig into it. Enjoy with an ice cold ‘Bak Country Hazy Pale Ale.

The huacatay, achiote, and aji panca pastes can usually be found in the international isles of a grocer, but if you're having trouble check out your local market. 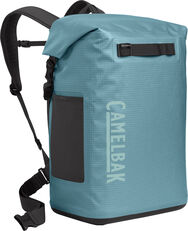