Gabriela DeBues-Stafford on Pride, Community, and Her Personal Journey Through Running

It’s a good sign if, when asked where your favorite place to run is, you answer, “home.” Gabriela DeBues-Stafford (known by many as ‘G’) and her husband Rowan just moved into their new home in Victoria, BC. It’s a long way from where they met, at the University of Toronto, but they’ve quickly found it’s their favorite place to be.

The running paths are fast, flat, and surrounded by water. Like many of us, DeBues-Stafford finds a healing power in water. She grew up near Lake Ontario and then spent significant time running and training along the canals in Glasgow; being near water is like comfort food for her.

For the Canadian athlete, life doesn’t fit perfectly into boxes. She likes to spend time in lots of different spaces and she prefers to open things rather than close them.

DeBues-Stafford is a middle-distance runner and two-time Olympian. She’s a daughter, a sister, and a wife. She identifies as a queer-bisexual-woman and a proud member of the LGBTQIA+ community. For the 2020 Tokyo Olympics, DeBues-Stafford dyed her hair in bright rainbow colors as a statement saying, “I’m here and I’m queer.” And she’s damn fast, too.

DeBues-Stafford didn’t always fully acknowledge who she is, but she does now, and she wants others to feel comfortable doing the same. For DeBues-Stafford, loving oneself is a version of home.

The Personal Training Journey of an Olympic Athlete

In February of this year, at the David Hemery Valentine Invitational in Boston, DeBues-Stafford broke the North, Central American and Caribbean record in the indoor 5,000 meters with a time of 14-minutes 31.38-seconds. Her accolades could wallpaper a room.

But it didn’t start that way. Success in running came gradually, and for a long time it was rooted in suffering. DeBues-Stafford comes from a family of runners. It’s how her parents met. Her father, James Stafford, was a competitive runner who represented Canada at four World Cross Country Championships. Her aunt and mother were also runners, and she remembers watching races from a very young age. She watched and thought, “I’ll be that good someday.”

But at only 13-years-old, she lost her mother to leukemia. She clung to running even though it didn't come easy. What she realized was, when she did work hard—when she dug deep and faced even her darkest shadows—she was better than most. It became a delicate dance: how dark did she want to go and for how long?

“As a young kid, I remember having that realization of oh, if you're willing to hurt, then you'll be able to run a lot faster. That’s not necessarily a common realization to have as a kid, which I credit to my parents, but it also made racing super intimidating.”

The athlete got used to the idea that racing meant getting ready to hurt.

“I would sometimes beat myself up because I would think, Oh, I could have hurt more and gone faster.”

Race anxiety was only exacerbated when DeBues-Stafford’s mother passed away.

“[My mother] was a teacher at my school. And even though my dad was the big runner in the family, she was the school’s cross-country coach.”

Eventually, though, things got better. She told her dad that she loved training but didn’t love racing, yet. He told her she didn’t have to race—she could just run for the sake of running. So, she did that for a while. And eventually found her way back to competition on her own terms.

“My family helped me find the most that I could get out of myself and out of running. I'm not sure that if I had been born into another family that I would have really figured out how I could be so much better.”

DeBues-Stafford joined a track club, made some friends, and had a coach that wasn't a family member.

With her newfound interest in running, DeBues-Stafford was able to fully embrace how good she was at it, and how strong it made her feel. In college, she discovered an incredibly welcoming community in the Toronto running scene.

“Toronto is a very diverse city. I feel like it's a super great space and an accepting space. I feel very lucky and privileged that I grew up in Toronto.”

Being an openly queer athlete in the public eye is not always easy, though. Her rainbow dyed pixie cut for the 2020 Olympics was met with huge support, but there was also resounding hate. Still, she remains full of hope for the running community as a whole—full of energy to be an example, an ally, and an advocate.

DeBues-Stafford knows now that her thirst is for running, building a more positive, inclusive community, and for being true to herself. The rest is just noise.

“If it gets too intense, I'll log off social media and spend quality time with Rowan. He's amazing.”

These days, DeBues-Stafford has a much more lighthearted approach to running. She throws down and puts everything she has into her workouts, but she also likes to make it fun. And when she’s not looking to break the tape, there’s nothing she wants more than a casual run next to the water, fully enjoying her home. 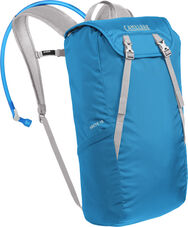