Introducing one of the kings of MTB, Eric Porter. A professional mountain biker for over 20 years, Porter has taken the podium in just about every type of mountain biking contest you can imagine. Slopestyle, downhill, freeride—you name it, he’s raced it.

Before moving to his current base in Utah, Porter grew up shredding the local trails in Louisville, Kentucky. Funny enough, young Eric Porter had aspirations to be a pro snowboarder. Fortunately, he found a passion for cycling in his early teens, and even worked in bike shops throughout high school. In college, Porter raced collegiate cross country, downhill, and slalom.

The athlete went semi pro in 2001 after winning the DH and slalom national championships (both in the same weekend). A few years later Porter went full pro, but not before meeting a bunch of folks in the industry, riding all the NORBAs, and becoming the first to grind a handrail on a mountain bike.

Since then, Porter has embarked on—and excelled in—numerous international competitions, including the World Slopestyle Tour. All while being featured in mountain bike films and magazines all over the world. Porter continues to share exclusive race tips and ride clips on his YouTube channel, Porter MTB. You can also check him out in our very own CamelHaks videos.

As a sponsored pro for Diamondback bikes, Porter has worked closely with the brand to develop and improve their bikes. He also currently serves as President of Wasatch Trails Foundation in Utah, which builds and maintains mountain biking trails in the area. Porter has built an epic bike run in his own backyard (his dream setup) where he can share the love of MTB with his two sons.

As a CamelBak Athlete, Eric Porter continues to tie his advocacy for MTB and riding into stories that inspire people to protect public lands and the environment. His passion for all aspects of biking is beyond clear, and we couldn’t think of a better person to have on Team CamelBak. Hell yes! 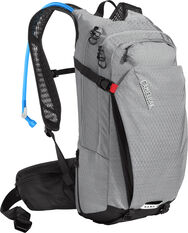